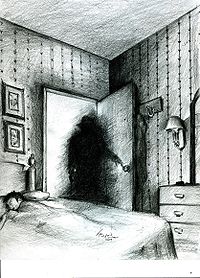 Authors like Rosemary Ellen Guiley, Jason Offutt, and Heidi Hollis have helped popularize the concept through books, articles and appearances on radio talk shows devoted to paranormal subjects such as Coast to Coast AM where listeners are invited to call in to relate stories and "sightings". Shadow people are typically described as black humanoid silhouettes with no discernible mouths, noses, or facial expressions, child-sized humanoids, or shapeless masses that sometimes change to human like form and featuring eyes that are either glowing or not discernable. Movement is said to be quick and disjointed, and some stories describe the visible outline of a cloak, or a 1930s style fedora hat.

Various authors and paranormal-themed web sites have drawn beliefs and speculation regarding shadow people from religion, parapsychology, metaphysics, cryptozoology, demonology, and the occult, proposing that shadow people represent a Thoughtform (egregore), ghost or demon that was created by events in which extreme physical/emotional stress/trauma has taken place, have been purposefully summoned through black magic or other occult practices, or are creatures who exist on a separate plane of existence that occasionally overlaps with ours. Others believe shadow people are two-dimensional beings, are related to Grey aliens, or to the Reptilian humanoids found in conspiracy beliefs such as those promoted by David Icke.

Several principles based in science can be used to explain reports of shadow people, including optical illusions or hallucinations brought on by physiological/psychological circumstances, drug use, and the interaction of external agents on the human body.

When a specific region of the brain called the left temporoparietal junction is stimulated, it can create the illusion of a shadow person. Images seen in peripheral areas of vision can be caused by pareidolia, a condition in which the brain incorrectly interprets random patterns of light/shadow or texture as being familiar patterns such as faces and human forms.

The same condition can also be observed in macular vision in low light conditions, or when viewing a complex but random image. A common example would be perceiving a shadow, thrown by an item of furniture in a darkened room, as being a person.

Hypnagogia, also known as "waking-sleep", a physiological condition in which a person is part-way between sleeping and waking, can also account for such perceptions. During hypnagogia, a person can be conscious and aware of their environment, but also in a dream-like state where they can perceive images from their subconscious. People experiencing waking-sleep commonly report the sensation of lights or shadows moving around them, as well as other visual hallucinations. A feeling of dread is also a sensation that occurs when experiencing hypnagogia.

Hypnagogia is sometimes known as 'the faces in the dark phenomenon' because those who experience this state commonly report seeing faces while experiencing waking-sleep. Similar hypotheses have been put forward linking this condition to a number of other apparent paranormal experiences, including alien abductions, paranormal nocturnal visitations, and religious experiences such as contact with angels or demons.